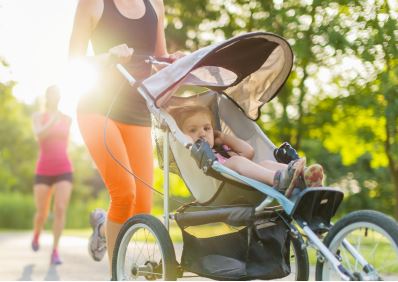 BEING A MUM & EXERCISING SAFELY – Part 1

I’m writing this article from a place of passion and why women’s health post-natally and return to exercise programs have become a BIG interest for me.  Several years ago I experienced an “event” with a friend.  She had given birth to her second child with an uncomplicated pregnancy and birth.  After advice from her GP about post natal depression, she was advised  at her  6 week post natal check up that “she was good to go and get back into exercise” as this would be beneficial for her state of mind.  At no point did the GP discuss the intensity of exercise she should be undertaking, the symptoms of a problem during such exercise, or the risks involved in undertaking a high intensity exercise program at 6 weeks post natal.   Nor did the GP explore her mention of occasional bladder leakage when she coughed or sneezed, so she assumed this was normal as another Mum was talking to her about this in the surgery waiting room.

Armed with the knowledge that she was “good to go” she went back to a group pump class at her local gym.  She tells me that she came away from that class feeling a “heaviness” in her lower abdomen with a few “pinging pains”.  She dismissed this as symptoms of just being out of shape, and went back two days later to do a HIIT class, as this had been her favourite class prior to pregnancy.   She left class that day feeling that something was wrong “down there” but after she went back to bed for a bit she felt better.

So, was she just out of shape?

Or were there warning signs that, if recognised by her GP and her trainer, could have prevented a life changing event?  100% yes to warning signs!

Unfortunately for her, there were many warning signs of pelvic floor dysfunction.  I’m going to cut this story short today but I will pick it up again later in the week.

The message I’d like to get out there is: as a new Mum returning back to an exercise program of any kind, you need to be aware of MANY things.  Without the correct knowledge base and supervision during exercise, a string of seemingly unrelated events can lead to a life-changing event which could have been avoided had the warning signs been recognised and then addressed by a qualified health professional (like a women’s physiotherapist).

At Enhance PT we are committed to providing you with the best service and the best industry standards.

If you have any specific questions related to health or nutrition, please feel free to drop us an email